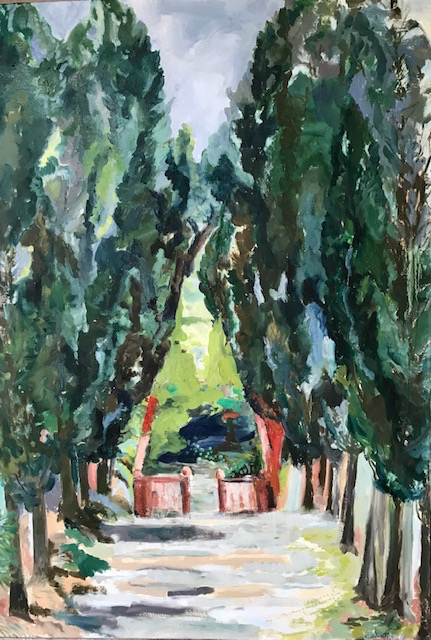 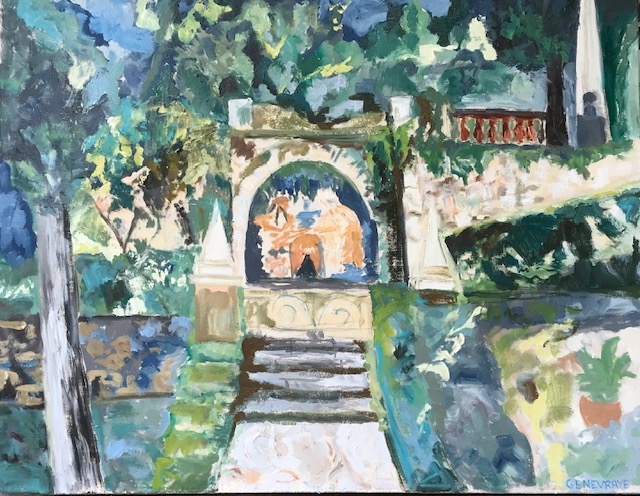 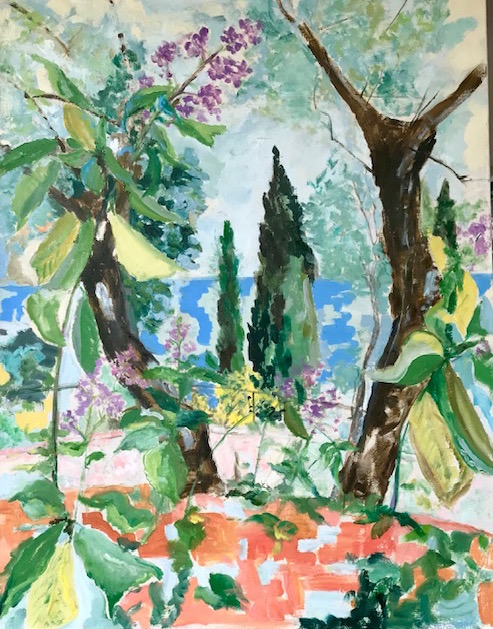 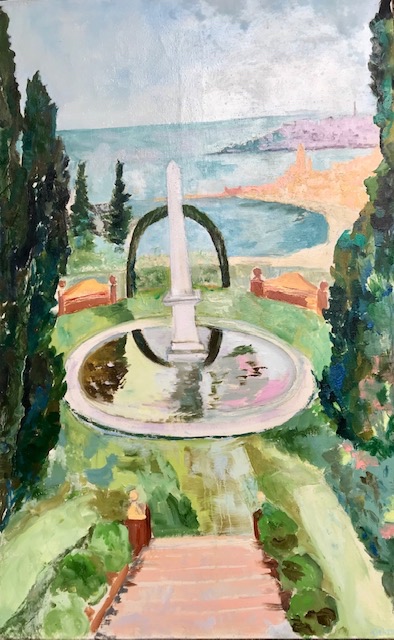 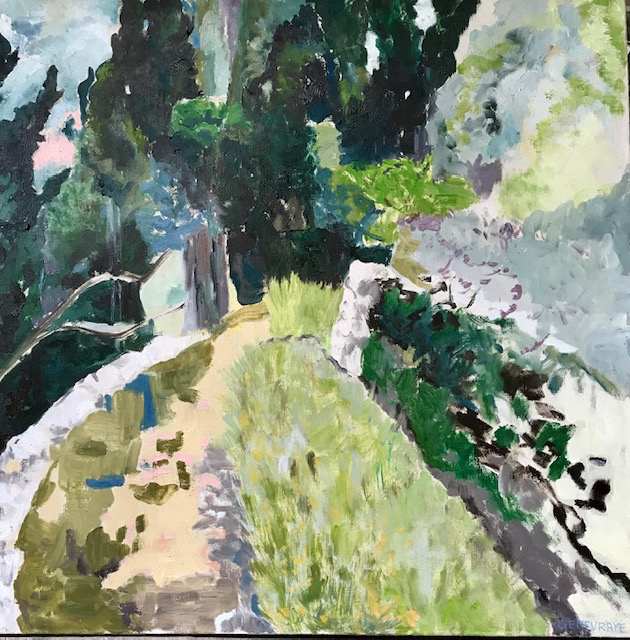 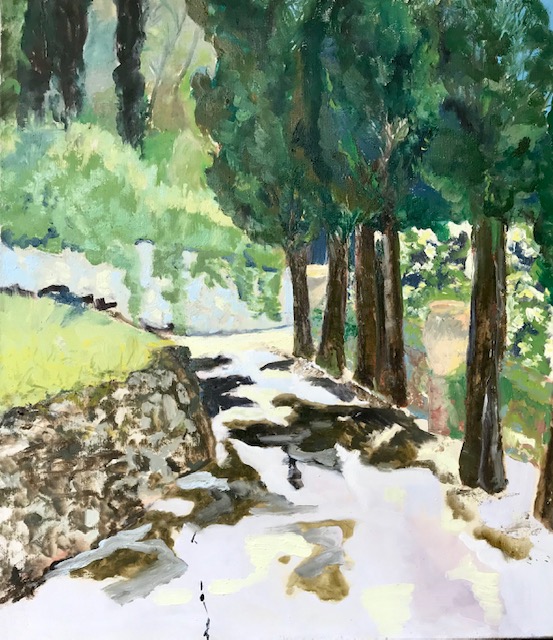 I am excited to share with you all the images from my residency in Menton, France. This was a transformative experience and I’d like to share a text with you that’s longer than my usual Monthly News, but explanatory of this new direction in my work. I hope you enjoy it as much as I have spending time in this magnificent garden.

Arriving at Les Colombières property in Menton, France, I was soothed by the soft Mediterranean colors of a milky blue sky and the presence of the deep green of centenary cypress trees. The gates opened to a neoclassical terracotta red and ochre villa architect Ferdinand Bac built it in the 1920s. He painted the frescoes inside and laid out the 4-hectare garden punctuated with ceramic fountains and notable dark bronze Greek, Roman and contemporary sculptures. A large frieze in Latin script running along the upper part of the building just below the roof greets the visitor: INVENI PORTUM SPES ET FORTUNA VALETE SAT ME LUSISTIS LUDITE NUNC ALIOS. “I have come home. Hope and Fortune adieu! You who have toyed with me, now toy with someone else.” I was anxious to unlock the enigmatic phrase and the tight geometric structures with my paintings of Les Colombière’s well-known garden.

It took a long time to find my subjects. I was not seeing my usual up-close views of plants. So I started making perspective drawings and studies of the fountains and sculptures looking for inspiration. In the many days of walking through this highly manicured and sculpted garden, I realized it had very little color and was instead dominated by masses of dense greens from hundreds of towering cypress trees. Yet it was dotted with colorful architectural structures and linear geometry to provide form and relief from the unrelenting green: a rotunda, a Philosopher’s Staircase, fountains, an obelisk, a terraced garden, the Spanish Pond, a bridge, labyrinth, diagonal hedges. So many formal elements competing for attention…

At last, I realized the ideas of departure and destination were the thematic keys to this garden. Each place within the garden was reached by a defined path, either framed with plants looking towards spectacular vedute of the sea, or a stone- or brick-lined path leading to yet another key spot revealing an architectural focal point or a sculpture. The secret message of garden finally revealed itself to me: she was always inviting me to get to the next place on a journey and once arrived, I had to go forward. It was clear each departure was leading me to the next destination, and so to the next painting.

And there it was: this garden is an Invitation for a Journey. The metaphor of a life as a garden became abundantly clear and suddenly the subjects flowed with the idea providing an evolution, a real departure in my style of painting. Distant views including sky, sea and perspective slyly, tentatively made their way onto the canvas.

I saw each path of life represented here in Les Colombière’s landscape.  The painting Mystery Path in the Terraced Garden begged me to go farther around the stone edge to discover what was beyond. Dark Way Towards the Spanish Pond was the brooding, foreboding pathway leading to unknown and murky waters. Light and airy hopefulness infuses Looking at Cap Martin on a Fine Day. The visually busy Density Towards the Fountain conveys too many tangential choices crowded by impenetrable foliage and decisions. Getting to the Sea Finally shows the entanglements and shrouded curtains we must pass as we try to see out to the great beyond. Waiting on the Path is about stopping to look before going forward.

I was deep into painting when my interpretation was confirmed some weeks later. I joined a group visiting the gardens with a professional guide who explained to us that Les Colombières was based the voyage of Odysseus in the epic poem by Homer, The Odyssey. Bac’s frescoes in the patio visually tells the story and the pathways throughout the garden are the physical, visual narrations of Odysseus’ epic journey. My conclusion about departure and destination in the garden was spot on, confirming an essential idea: great art is that which is discoverable by the viewer.

My interpretation of the villa’s Latin frieze also became clear and deeply personal: “Let Fate and Destiny go play with others; as for me, I will follow my own path.” Enjoy walking along the paths of life with me in this magnificent garden.