I was invited to paint in this most rare garden offshore Cornwall in the UK for the month of June. I arrived under the rain, after a 24 hour trip from Nice, which included a plane to London, then overnight train from Paddinton to Penzance, followed by a small plane to St. Mary's in the Scilly Islands, and then a private boat to Tresco Island. The island is about 3 kms in diameter with a population of 180 people, and only about 6 cars. I was given a bike, and by the 4th day, was able to get up the hill to my charming cottage without having to dismount! Mike Nelhams, the Curator of the Garden and his wife Isabelle where very welcoming, and I was immediately installed in my painting studio in the garden in the former "peach house", a long glass house which is used for propagation today. I worked every day, absorbing the rarity of the place. I realised that this garden in the Atlantic Ocean benefits from the gulf stream, providing one of the unique subtropical climates in the world with poor soil. There are plants from similar biotopes around the world that thrive in these conditions, with a strong point on giant echiums, aeoniums, and protea. All seven of the paintings stayed on the island in the family collection and for a future exhibit, as I am invited to return to paint the Autumn palette, probably in 2019. 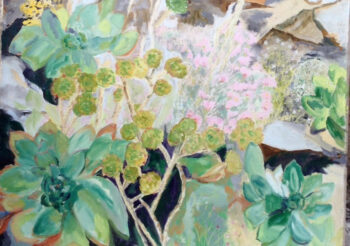 Aeonium & Lampranthus in the Rockery 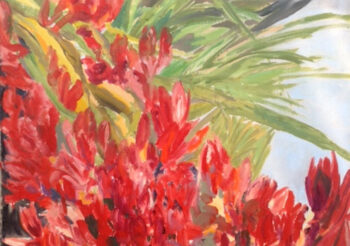 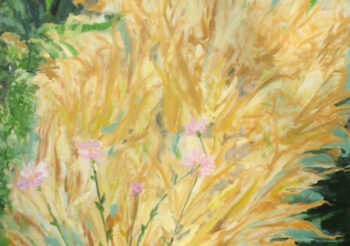 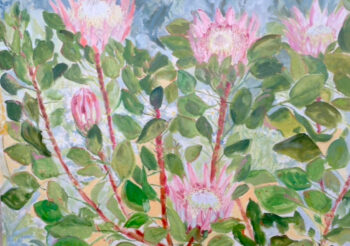 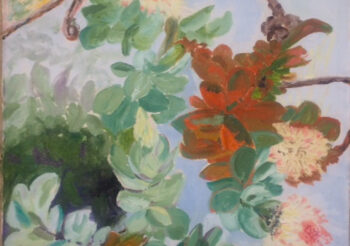